What are you looking for?
Reviews

Time for a bedroom refresh. We partnered with the sustainably-made wallpaper brand Bobbi Beck to give the main bedroom a revamp and we were not disappointed!

Since moving into my new home I’ve been thinking about the best way to spruce up the space without it requiring too much in terms of decorating. With it being a rental home, I’ve had to take a few things into consideration which has meant I’ve had to strip back on ideas to make them suitable for a rented space—which has actually lent itself to discovering new brands and exploring ways to refresh a room that otherwise might be overlooked.

Our review of Bobbi Beck wallpaper

For the bedroom, I wanted a feature wall that would bring my vision for a monochrome aesthetic with a ting of Japandi vibes to life. If there’s anything to keep in mind with a feature wall is the fact that anything is possible. They’re designed to give an element of surprise and delight inside a room through the use of vibrant colours, patterns, or murals. To get this look, I’ve searched through a number of wallpaper brands and designs to find the perfect wallpaper that would tie this together.

A brand that we’ve spoken at length about due to the fact that they seem like one of the best solutions for eco-friendly wallpaper that hasn’t had to compromise on style or quality is Bobbi Beck. Through conversations with their team, we’ve partnered with them to bring a new lease of life to the bedroom using their wallpaper. The brief was: monochrome, floral, and Japandi, and their range of wallpaper is one of the best we’ve seen.

They’ve categorised the designs by styles—art deco, modern country, retro—which in itself is incredibly helpful for when you know the look or era that you’re going for in a room. We were asked to choose what wallpaper would work best considering the look we were going for and how many rolls, I decided on the Trace wallpaper which has a gorgeous dark floral design with bold cream flowers and delicate shimmering gold outlines. The point to make here is that Bobbi Beck wallpaper is made-to-order, for some that might imply it’ll take time to arrive and slow down the process, but this was quite the opposite: the process for ordering was super simple and quick to arrive. 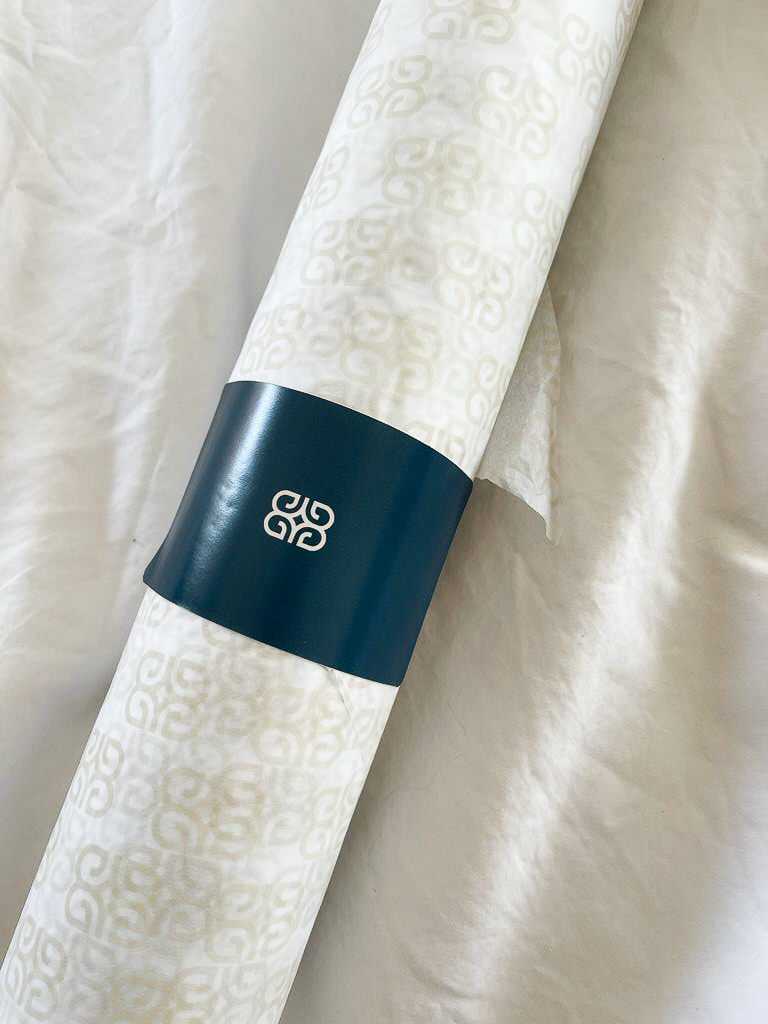 Once the wallpaper had arrived, I was blown away by the quality. Seeing it on a website is one thing, actually receiving it and feeling the quality is another. One thing I was slightly concerned about was whether the navy colour was going to be dark enough to fit in with the rest of the room. But I was not disappointed, the navy was rich in colour—almost black—which made the patterns look vibrant and stand out.

The instructions for the wallpaper were to paste the wall first, then hang the wallpaper. Now, because the wallpaper is extra wide and heavily patterned, I thought it would be best to measure and cut the paper to size before I did anything else. As it turns out (and you’ll hear in the video), I fell ill which meant I took a few days out before picking the wallpaper back up from where I left it.

First, cutting the wallpaper was surprisingly easy but hanging it? I’ve never hung the paper on my own before… I’ve always had an extra pair of hands to help shimmy the paper to lay flat or in-line with the strip next to it. I’m not going to lie, I was a bit scared of messing this up but I was gifted 4 rolls for 1 wall which gave me a bit of breathing space for mistakes. I started hanging the wallpaper and when I tell you it was easy, I mean it was easy. A lot of this will come down to the quality of the wallpaper itself, it’s thick which means you can move it around on the wall to align it with the pattern, without the fear of it ripping.

Side note: an entire piece fell over me while I was up the ladder. I was sure there would be a big crease in it but there wasn’t. Again, what a relief. One thing I will say here is that I only have 1 roll of wallpaper left out of the 4; although the rolls are extra wide they aren’t the usual length of other standard sized wallpaper (that said, my ceiling is 12 ft.) I’ve used which isn’t a problem but for those considering how many rolls to buy, this will be something to consider.

Overall, the feature wall took me a couple of hours and while I made a couple of mistakes, it’s nothing drastic and no one else would be able to notice other than me. All in all, I’m super impressed with Bobbi Beck wallpaper and this won’t be the last time I’ll be using the wallpaper for my home.

* The products mentioned in this blog were gifted by Bobbi Beck.

Inside The Awe-Inspiring Traditional Farmhouse With A Touch of Vintage

If the idea of bringing two styles together is daunting, this home may be the inspiration you're looking for.

A Novelty or Trend: What’s Next for Interiors?

We're looking back to the beginning of the year to predict the interior trends that are here to stay.

From jungle to bold shapes, choose a wallpaper design that sparks your child's imagination and will grow with them.